Rob and I had been married a little over five years and had already lived in three different states and six different homes. We had struggled as most young couples do while adjusting to married life. But one of the trials I never thought I would go through was being childless. You see, I come from a family of eight children and Rob from a family of six children. I just thought that I would decide how many children I could handle and they would come. Obviously that didn't happen.

It was especially hard for me. I didn't know how to identify myself. My mom was a wife but foremost she was a mother. I had no idea how to separate the two. I shared how I felt with Rob but, like most men, he couldn't even begin to comprehend what I was going through. I felt inadequate and alone.

We had been living in Colonial Beach, Virginia for three years when I had an undeniable prompting that we needed to move. Rob thought I was a little crazy but said he'd experienced enough to know that we should follow my "intuition". It really didn't make any sense to move. Rob had a stable job working for the Department of Defense, we owned a home we were remodeling, and had some great friends there. At first we didn't know where to go but we finally decided to try Pittsburgh, PA. Just four weeks after beginning the job search we had obtained employment for Rob and had already moved to Pittsburgh.

Things were good for us but we still felt a void in our lives. It's amazing how difficult it is to make friends with other couples or be involved when you don't have children. I'm sure in some circles this wouldn't be a problem but Rob and I are devout Latter-day Saints (Mormons). In our faith, family is the most important thing. It is not a question of if you will have children but of when you will have them. We were definitely the exception among our acquaintances and friends.

In the Spring of 2006 we decided to try IUT (Artificial Insemination). This involved invasive examinations, daily shots of strong hormones, and a slight loss of dignity. The hormones made me very ill and moody (Rob might have used a different word for this). The day of insemination came and as the doctor was taking care of business she told Rob and I to look into each others eyes. Perhaps for some it may feel like a magical moment but for me her saying that just added to the humiliation. Who are we kidding? It was a medical procedure not a special intimate moment. Maybe I would feel differently about that moment if we had been successful in conceiving but a month later I felt the bitter sting of disappointment. Actually heartbreak would be a better description of what I felt. Rob wanted to try again but I just couldn't go through it again. I was ill from messing with my hormones and emotionally drained. We decided at that point that we would have to complete our family in a different way.

Choosing to adopt is not an easy decision. It's one thing for God to bless you with a "child of your own" but to convince yourself that you are ready and acceptable to parent "another person's child" was difficult for me. Not only did I have to convince myself but we also had to convince an adoption agency and an expectant mother. We all know that an expectant mother and agency are much more discriminating than God. God doesn't care what your income is, what kind of home you live in, what you look like or how much education you have but if you want to adopt then you better shine in all those areas. We also considered becoming foster parents but had obvious concerns about doing that. We came to realize that whichever we chose there was a risk of heartbreak. I've summed this up in a paragraph but it was a decision that took us many months to make.

October 30, 2007 we became foster parents. We had no idea what we were getting ourselves into.
Posted by Mom Forever at 3:50 PM

Mom Forever
I have been married 9 years. My husband and I tried to have children for over 5 years when we finally decided to become foster parents. We adopted three beautiful children three years ago. Now we are putting down roots. 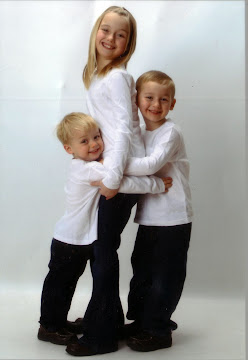